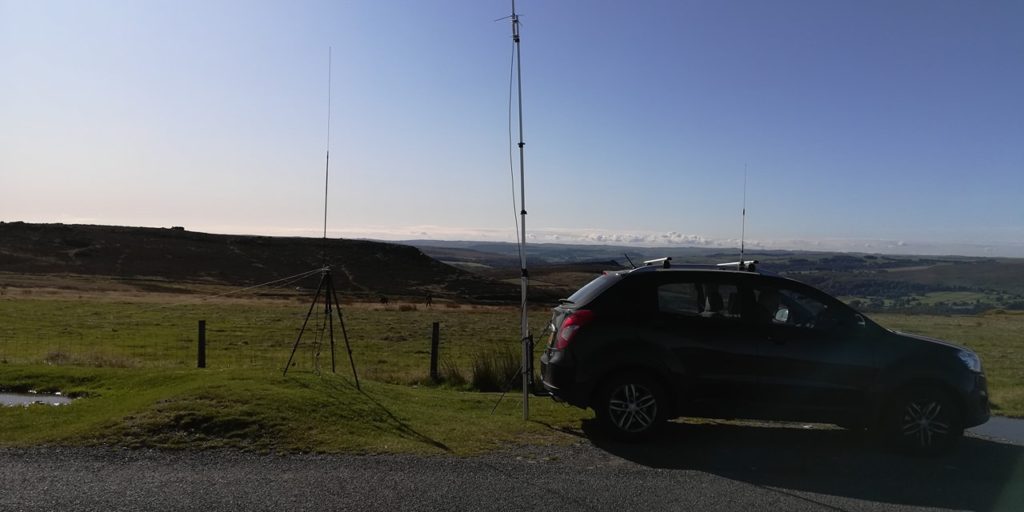 Two of our members Gary M0ONI and Paul M0PJA went out to the Peak District to Activate it as part of Parks on the Air (POTA), this is how they got on.

Before we started out we selected a spot in the Dark Peak which we were sure would have good take off in most directions.

We also wanted to try out two Moonraker Ampro mobile Antennas for HF, having had some problems the previous week with another mobile antenna that didn’t like rain.

Gary set about putting the HF Antennas up while Paul started to work 2m FM, from my first initial CQ Call I was able to pick up a number of Stations calling me, this is always a good sign. With in the first hour, we had worked 12 Stations, we like to chat and try to avoid the ‘Rubber Stamp’ type of QSOs you so often get these days.

We were able to work stations in Wakefield, Leeds, Bradford, Doncaster, Sheffield, Worksop, Nottinghamshire, Derbyshire and Shrewsbury by 12:00 we had made 16 Contacts.

Our plan was then to switch to HF and try 40m which we did and had QSOs with people in Germany, Denmark, France, and Belgium.

Then it was about time for lunch, we had set up in a great place at the side of the road with views all the way around, we had a very good view of the Hope Valley, with a slight blot, being the cement works at Hope. (there is a local joke, that you can live in Hope but you have to be buried in Castleton, I believe the Hope graveyard is full), the weather was very good, bright sun, and a slight cold breeze.

After lunch, we switched to the 20m antenna, these were very easy to set up and one set, unscrewing them does not upset the VSWR adjustment. 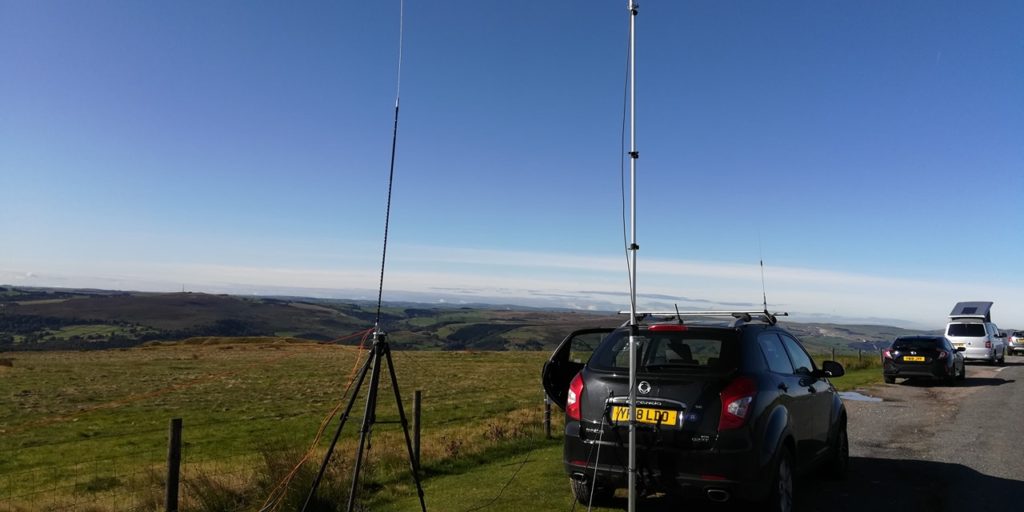 We called CQ on 20m and very soon we were answered by Heinrich in Munich DF3CH after a good QSO, I said QRZ and we received a call from Keith KD1KT in Massachusetts, this wasn’t the first time we had worked the US, however it was the first time portable and the first time activating a Park on the Air, and to he honest days later and I am still buzzing.

We when on to work stations from; Michigan; Chris K8HQ, Italy; Giuseppe IU2KBP, Poland; Leszek SQ9MDF, USA; Bill W1OW from Douglas Massachusetts, France; Wolf F/HB9BI, Sweden; Gunner SM7UZB, Germany; DL5DZ Detlef. Then, unfortunately, we started to get some QRM from a Vehicle nearby and went back to working 2m where we made another 5 contacts.

We had such a great day and a real buzz from working radio, it was only the day before someone was telling me the bands were dead!

Equipment used was an FT-897 running about 20-40 watts on 2m and 75 watts on HF, for 2m we used an n50 colinear and for HF the Ampro mobile antennas I mentioned before.