VHF NFD is the next big event on the RSGB contest calendar, scheduled for 4 and 5 July 2020. It can’t be run in its normal multi-operator format, so the RSGB Contest Committee has designed an interesting alternative for single operator stations. The rules have been set for fixed stations only.

Many of our members will be taking part, for more information please visit: https://rsgb.org/main/blog/news/gb2rs/headlines/2020/06/12/lockdown-vhf-nfd-rules-announced/ 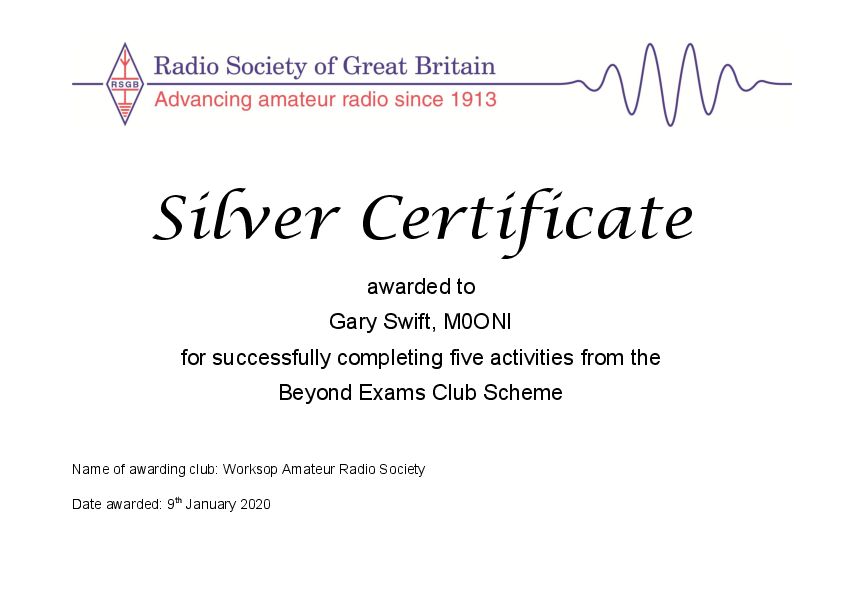 Many congratulations to Gary Swift (M0ONI) on being the first Radio Society Member to be awarded a Silver Beyond Exams Certificate.

Gary has put on a lot of effort into the scheme and its great to see it pay off.

We are privileged to be taking part in the scheme pilot, on behalf of the Radio Society of Great Britain (RSGB).

Currently, 13 radio society members have registered, with Beyond Exams, and three Bronze and one Silver Certificate has been awarded.

To Register All Worksop Radio Society Members need to do is to send an email to BE [at] g3rcw.org.uk  with their call sign and name. Full details will be sent to you.

Once you have completed sufficient activities to gain an award then you also need to send details to Carol Archer 2e0XCA who is our Worksop Radio Society Scheme champion. Carol can also help you with any questions you might have.

The RSGB is looking for feedback on the Beyond Exams Scheme, by Jan 17th, 2020. Please send that via Carol. 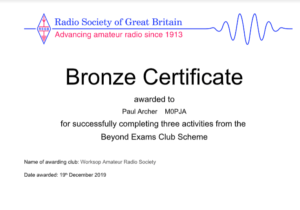 As members of the Worksop Amateur Radio Society will be aware we are running a pilot of the RSGBs Beyond Exams.

Its good to hear of so many members taking part

Congratulations to Gary M0ONI and Paul, M0PJA on being the first to gain a Bronze Certificate.

If not too late for you to get started, please see the Notice Board or Member’s Facebook page, for the full details.

Registration is simple and quick you just need to send your name and call sign to the email address advertised.

Have made the following announcement. – New FT4 Contest Announced.

Please check the RSGB HF Contest Calendar for three new events that have just been added.

We are running a short series of one hour, “experimental”, FT4 Contests over the autumn. These are not part of the 80m Autumn Series but are slotted between Autumn Series weeks. The rules are available here. The first event is on Monday 2 September.

Note that the scoring is based on total QSO distance, rather than the number of QSOs, with a maximum distance score of 1,250kms. This is similar to many RSGB VHF contests.

We will have bonus points for working each of two HQ stations but there will be some strategic decisions to make if you are entering: do you try to work the bonus stations first with the danger of a long delay to make a QSO, or leave them until later in the hour? Is “running” or “S&P” the best way to operate? Lots to think about!

This will be an opportunity for us to assess FT4 in the context of domestic HF contests and a chance for you to try something different.

Mark Jones G0MGX  who is the AROS Co-ordinator will be giving a talk on the Amateur Radio Observation Service (AROS) is an advisory and reporting service of the Radio Society of Great Britain (RSGB) which is intended to assist radio amateurs and others who may be affected by problems which occur within the amateur bands or which develop on other frequencies as a result of amateur transmissions.

The Radio Society of Great Britain (RSGB) are asking people to check out their new Amateur Radio Strategy video update.

Worksop Amateur Radio Society is hosting an RSGB Train the Trainers event on Saturday, 18th November 2017 at the Crossing Centre, Worksop.  The Train the Trainers course is free to any RSGB member teaching at Foundation, Intermediate or Advanced level.

It is especially designed for anyone who does not have a professional background in teaching. The Course runs from 9am to 5pm, with a break for you to eat your own packed lunch. Tea and coffee are provided.

Places must be pre-booked. Please contact Steve Hambleton G0EAK by email g0eaksteve@gmail.com  to book your place.

Worksop Amateur Radio Society are very pleased to be hosting an RSGB Train the Trainers course on Saturday 18th November 2017.

The course will take place at The Crossing Church and Centre, Newcastle Street, Worksop, Nottinghamshire, S80 2AT between 09.00 and 17.00. To book a place please contact Steve Hambleton, G0EAK. Email: g0eaksteve-AT-gmail.com  (Spam Block replace the -AT- with an @).

For members of the Worksop Amateur Radio Society, who are not yet RSGB Members. The RSGB have for some time now been putting copies of their Magazine “RadCom” on line available for members to access.

This is proving useful if you are like me and once I have read a magazine, I normally leave them at the Doctors / Dentists / Hospital, because they have got to be better than those old copies of Peoples Friend or Take a Break, I normally find on Display.

I have also taken to adding a sticker to the back page so that if interested a reader is directed to our club here in Worksop.

It has also saved me scanning in articles I was particularly interested in.

Ofcom has agreed that the band will be made available for another year.

However, to continue to use the frequencies you must obtain a new NoV.

These are available, free of charge, from the RSGB website at rsgb.org/nov.